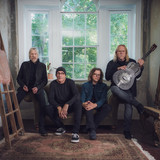 Twenty-five years…. By the time you see and hear the performances from these two shows, Gov’t Mule will have celebrated 25 years as a band -- something we never could have imagined. It’s no easy task keeping a band together for 25 years. You don’t get to do that without having built, nurtured, depended on, tested, damaged, and rebuilt important relationships. In fact, with any band that’s stayed around that long, it’s all about relationships. When we made the decision to document where the band is currently (musically speaking), it immediately occurred to us that this would be, among other things, a celebration of a lot of those relationships -- starting with the one between the four of us. The title, Bring On The Music, is obviously taken from the song of the same name that deals not only with loss and the passing of time, but also with our relationship with our audience as well. The same applies to “Traveling Tune,” which opens and closes the main program of the film. Without our audience, there would be no chance or reason for us to be around 25 years later. It was also obvious that we wanted to film and record at the Capitol Theatre in Port Chester, New York, which is one of our favorite venues. Since its re-opening in 2012, myself and Gov’t Mule (together and separately) have played there many times and have had many magical shows there. To quote Jerry Garcia, “There’s only two theaters, man…. The Fillmore and the Capitol Theatre."