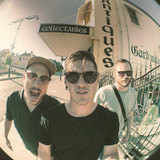 HAND CRAFTED EGO-FREE HIP HOP | PERTH WESTERN AUSTRALIA Guess what!? The Stoops are back! It has been 6 years since our last track, Middle of a Riot, and while all has seemed quiet on the Western Front, the arsenal of tracks we've got ready to drop would suggest otherwise. So get ready, we're about to peel the poster back from our own Andy Dufresne tunnel. We are a 3-piece outfit from Perth, WA, who have been making golden era inspired hip hop for going on 15 years. We comprise of three core members; DJ - Arms In Motion and emcees -Roc Walla and Pronto. We've spent the majority of the last few years tweaking and evolving our soul- fuelled signature sound in preparation for what could now be almost regarded as a Debut release (although it is our third). “Boom Cycle”, is an entirely self produced album which we are beyond excited to finally reveal to you. We have been performing for over 10 years and have supported a number of world-class musicians including Mac Miller, Jurassic 5, Pete Rock, Kurtis Blow and Loop Troop, Thundamentals and Illy. http://www.thestoopsofficial.com