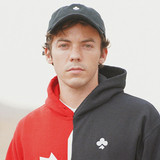 Most known for his successful career as an actor, which took off at the age of 10 when he played the son of Russell Crowe in the academy award nominated film ‘Cinderella Man’, Toronto’s own, Connor Price is now showcasing his musical talents, blending an old-school focus on lyrics and wordplay with a new-school focus on beats and flows. ​ In the midst of a successful 18 year career as an actor, Price began to pursue his passion for hip hop. In August of 2018, Connor released his debut project, the '4 of Clubs EP’. The album's lead single, ‘Starter Pistol’ received airplay on Toronto’s number one radio station, FLOW 93.5.

​ Connor started releasing music independently under his self-owned ‘4 of clubs’ brand. He began to further develop his sound and fanbase by putting out a brand new song every two weeks. Building momentum fast, the self-directed/edited music video ‘Typical Rapper’ accumulated over 1 million views in the first month. ​ This was followed by a release titled “Courteney Cox ” featuring world famous entertainer, Idris Elba. The collaboration spawned from an Instagram challenge Idris created, and the song caught the attention of Courteney herself, who then made a cameo in the official music video. With only a limited discography, the young artist has already amassed a global fan base spanning several continents. His music has been featured on Spotify’s New Music Friday; as well as publications Billboard, Entertainment Weekly, ET Canada, Earmilk, and more.