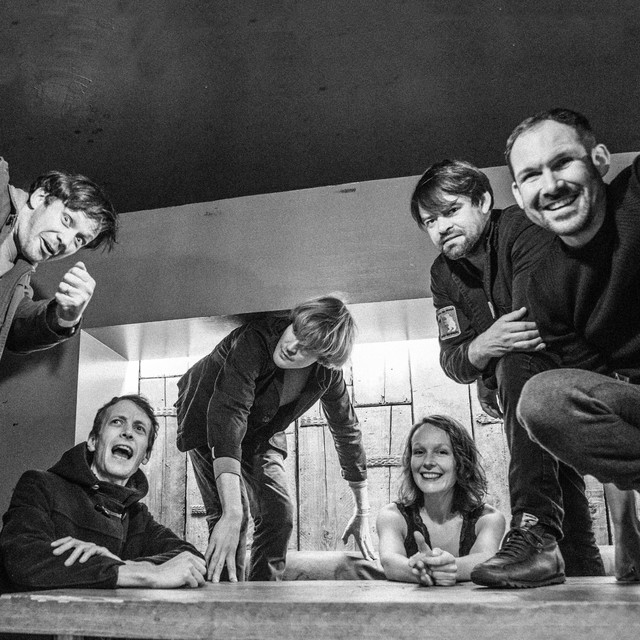 A sextet from Natland, Cumbria, England, British Sea Power are a rather conceptual indie band -- compared more than once to Joy Division and the Cure -- whose music incorporates elements of art rock and post-rock experimentalism. The group was formed in 2000 by brothers Yan Scott Wilkinson (vocals and guitar) and Neil Hamilton Wilkinson (vocals, guitar, and bass), who teamed up with a longtime friend, drummer Matthew Wood. When Yan enrolled at the University of Reading, he met like-minded musician Martin Noble, who played guitar and keyboards, and soon they began performing under the moniker British Air Powers, changing the name to British Sea Power after a song from their early repertoire. Their live shows received notice early on, thanks in no small part to the group's offbeat theatrics and visual flair (the band often wore military uniforms, large stuffed birds, and artificial plants were a big part of their stage set, and a man in a bear costume sometimes joined them on-stage). Rough Trade's Geoff Travis was impressed by one of British Sea Power's (literally) wild performances and signed them; by the end of 2001, they had two singles in the racks: "Fear of Drowning" on Golden Chariot and "Remember Me" on Rough Trade. British Sea Power expanded to a five-piece when Eamon Hamilton of Brakes was recruited to play keyboards with the band; he was also known to pick up a bass drum and charge into the audience when the spirit moved him. The group released its critically acclaimed debut, The Decline of British Sea Power, in 2003. Open Season arrived in 2005, but the following year, Hamilton left the group to concentrate on Brakes, while two musicians joined the lineup, Abi Fry on viola and Phil Sumner on keyboards, cornet, and guitar. In 2008, the expanded lineup recorded the eccentric but accessible Do You Like Rock Music?, then followed it with an unusual project, lending their signature post-punk atmospherics to director Robert Flaherty's bleak 1934 film Man of Aran, composing a complete soundtrack for the movie that was released on DVD, as well as performing the score in its entirety at a number of screenings. In 2010, the band unleashed the seven-track EP Zeus, followed in 2011 by their fourth full-length outing, Valhalla Dancehall. Machineries of Joy, inspired by a 1964 collection of short stories of the same name by Ray Bradbury, arrived in 2013. Late the same year, British Sea Power unveiled another film score, penning the soundtrack for Penny Woolcock's documentary From the Sea to the Land Beyond. In 2015, British Sea Power reissued The Decline of British Sea Power through their own Golden Chariot label; it appeared in two expanded editions, one featuring a bonus disc of rare tracks, and another that included a DVD of rare film footage along with the two CDs. That same year, British Sea Power staged a concert tour in which the group was accompanied by a traditional British brass band at each stop. At the end of the tour, they entered the studio with Foden's Band, a celebrated brass ensemble first formed in Cheshire at the dawn of the 20th century, and re-created the live set from the tour; the sessions were released in October 2015 under the title Sea of Brass. British Sea Power returned in April 2017 with their sixth studio effort, Let the Dancers Inherit the Party. The record was paid for in part by a crowd-funding campaign to enable its release, and was recorded in multiple locations, including Clapham, Lympne Castle, Skye, and the band's native Brighton. ~ Andy Kellman, Rovi