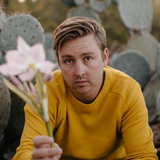 "Tyson Motsenbocker is a singer songwriter from Central Washington. Since his relocation to Southern California, Motsenbocker has released one full-length records and two EPs. His second album, "Someday I'll Make It All Up To You," is due for release on Feb. 13, 2020. His sophomore release embraces life's complexities with a balance of both charm and grit as he reflects on a world he's wrestling to understand. His album pursues time's ability to both slow life down and quickly transform it, having experienced its duality after returning home from multiple tours to a nearly unrecognizable city. The jarring realization resulted in an album rich in observations about life's propensity to trick you into thinking it won't change. His songs- both lyrically and sonically- are abrasively honest. "Someday I'll Make It All Up To You" was produced by Tyler Chester (Blake Mills, Andrew Bird), with performances by Aaron Redfield, Griffin Goldsmith (Dawes), Dan Bailey (Father John Misty), James McAllister (Sufjan Stevens, Jeremy Enigk), Madison Cunningham, Sam Weber and Matthew Wright, and was recorded almost entirely live. The project relies heavily on the performances of the musicians and the strength of the songs, not technology's ability to alter its imperfections. The result is an album perfectly imperfect, perhaps best exposing Motsenbocker's sincerest agenda to tell the truth." - Tess Carrlucci