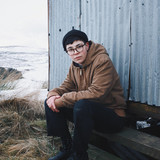 After releasing his debut EP ‘Out in the Ocean’ in 2017 (produced by Billy Kennedy and Andy Monaghan of Frightened Rabbit) , Edinburgh based singer/songwriter Scout has been traveling round the UK and Europe honing his craft and making a name for himself as he goes with his unique style of bittersweet folk music.   Scout has released two singles since his first EP, ‘Holding On’ in 2018 and ‘Save Me a Seat’ in 2019 which received national airplay on BBC Scotland from Janice Forsyth and on BBC Introducing from Vic Galloway.   He has supported artists such as Lucy Rose, Rae Morris, and dodie.