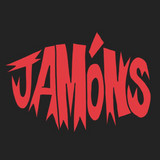 THE JAMÓNS are a Los Angeles-based rock and roll group made up of longtime friends, Brandt Shandera (guitar, vocals), Kennedy (bass, vocals), Nicholas Romero (drums), and Chris Glaab (saxophone, keyboards). Drawing their influences from indie rock, ska, punk, power pop, and new wave, their all-out live show has been described as “a slam-bang rock and roll party!”  The group began as a teenage ska-punk band in the 1990s. During that time they shared the stage with some of the biggest bands in the genre (The Hippos, Reel Big Fish, The Aquabats) and honed their sound through the release of 3 EPs. In 1998 they recorded their only full-length album, Beauty Bravura, and became known for blending influences such as The Kinks, Fugazi, The Pixies, and Elvis Costello, to create a unique twist on their ska-punk origins.

The band was inactive from 2001–2017. During this time Kennedy found success both as a solo artist (Karate, Your Mama) and producer-writer (BØRNS, Grizfolk). In 2018 The Jamóns reunited for a mini tour, and re-released Beauty Bravura, making it available digitally for the first time.  In 2019 they began working on new songs, with Kennedy recording and producing.  In 2020 they released 3 new singles — Mommy Long Legs, Jennifer Lawrence of Arabia, and Foolio — with plans for more new music and live shows to come.