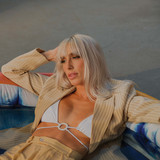 Born and raised in LA, Chandler Leighton popped into the music scene with her dark edge, soft, but emotional vocals debuting her first single with artist ILLENIUM on his 2019 Ascend album. Chandler was in musical theater by the age of 7 and choir, studying audio production at San Francisco State and then coming back to LA to continue to pursue music. That same year, chandler was Charting #1 on dance billboard on “Home” with LODATO non featured. "When I write, I want it to be personal. I think the listener knows when you mean it, and when you don't. You'd be surprised at how many people can relate to your story. I used to write a lot of stories and books as a kid. When I write music, I try to tap into that story telling in my music" says Chandler. "Its a lot easier for me to write about sad stuff then to write about happy stuff... theres more emotion in the dark.” She continues to feature in the electronic world, but is now turning to focus on her solo project which will release in 2021.