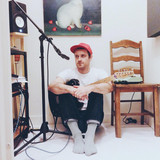 "Tender Glue (noun): Not a person. Not a band. Music made by an urge to create." Tender Glue is made up of Tom Gluewicki, who was originally born and raised in Poland and later moved to New York in 2002. He explains his first encounter with playing music when he was twelve years-old after he had fixed a broken guitar that his brother brought home. You can learn more about his story in the “ABOUT” section of his website. On September 25th, 2015, Tender Glue released his debut EP titled, “Wait For Steady Light”. After several years of creating original music, this album is a culmination of raw recordings, composed with minimal equipment, using the resources Tom had in his home. Full length album "Steady Light", which was a continuation of the EP, was released a year later on August 26th, 2016. The latest album titled "Closet Leftovers", was released on September 28th, 2018 on Tom's record label called Don't Label Me Records. The first four singles from the album were released between February to June of 2018. "Closet Leftovers" was recorded and produced by Tom in his studio apartment closet after he moved from Brooklyn to Manhattan more than a year ago.