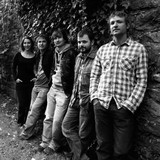 Ardentjohn originally formed in Edinburgh, now hail from all over, staying connected through their love for making music together. Uncut described them as ‘refreshing new arrivals’, Fierce Panda released their first ever single and their music has since featured on Steve Lamacq, Gideon Coe, Tom Robinson and Vic Galloway, who they performed a live session for on BBC Scotland Introducing. Adulation Music are delighted to announce the release of their latest album, Malin Head, available everywhere from the 12th of July 2019.