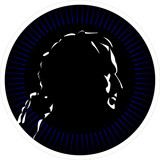 Peter Carlsohn’s debut-album; ”Out of the Blue” is his debut album as a solo artist, but there are quite some years of experience behind this project. Peter began his musical career in the 70s, and joined the legendary Christian rock band Jerusalem in 1980. He has recorded several albums with the band, and toured all over the world. He is also bassist for Rune Edvardsen & Red Band, and the band XT. Now he has his mind set for new adventures, with this solo project called Peter Carlsohn’s The Rise, which is a gathering of other experienced musicians, like Michael Ulvsgärd (Jerusalem), Stephen Carlson (Brotthogg, Mr Hansen Band, freelance musician), his brother Lars Carlsohn, Svenne Jansson (Glam, Golden Resurrection, Jerusalem), and Cutta John Kåre Gullestad (Cutta, Crush, Rune Edvardsen & Red Band, Steven K Band, Heartless). The music is melodic, but not too well-polished hard rock, easy to sing along with. Peter plays the bass guitar, and sings lead vocals on all the songs. Out of the Blue is written, arranged and produced by Peter Carlsohn, recorded by John Robin Skagerlind (Kid Million), mixed by Tobias Lindell (Europe, Mustasch, Avatar, H.E.A.T, Hardcore Superstar, Firewind/GusG, etc.), and mastered by Thomas ”Plec” Johansson (Firewind/GusG, Ia Eklundh, Soilwork, Dynazty, H.E.A.T, Narnia, etc.), and was released by JONO/PCM Music via Sound Pollution on August 7th 2020.