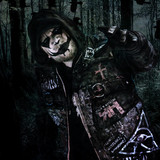 American rapper David Hutto unveiled his killer scarecrow persona Boondox at the turn of the millennium, catching the eyes of Insane Clown Posse. He was the first Southern artist added to the clowns' growing roster at Psychopathic Records, marking the label's expansion of its deranged and murderous brand of rap-rock within the indie rap sphere. The divergence from Boondox's Detroit-based labelmates was apparent in his hillbilly getup -- scarecrow hat, flannel shirt, and country boots -- and the Southern twang of banjos and harmonicas mixed in with his rap beats. Born in Richmond, Georgia and raised in Covington, Hutto played bass guitar in several local rock bands before venturing out as a rapper. Similar to his Psychopathic brethren, he first released his music via underground tapes as a part of the local outfit Southern Hustlas, Inc. Essentially being at the right place at the right time, one of the tapes he was selling at an ICP concert wound up in the hands of ICP themselves. After back-and-forth phone calls with ICP member Violent J, Hutto recorded his first studio album as Boondox, The Harvest, in Detroit. Released in July 2006, the entire LP was produced by Psychopathic's in-house man, Mike E. Clark. Soon afterward, Boondox joined labelmate Blaze Ya Dead Homie's Tombstone Terror Tour as a featured act at the end of summer 2006 in order to promote the album. After the release of the PunkinHed EP in 2007, Boondox issued his second full-length, Krimson Creek, the year after. The collection topped the Billboard Heatseekers chart and featured guests like ICP and Blaze Ya Dead Homie. South of Hell arrived in 2010, accompanied by a documentary titled Southern Bled. Hell would be his highest-charting album to date, peaking at 54 on the Billboard album chart. Over the following years, Hutto briefly ventured away from the Boondox brand. He left Psychopathic and released a gangsta rap album as Turncoat Dirty, later teaming up with friends to form the group the Underground Avengers, whose debut, Skarecrows, Weirdos & ClaAsholes, was released in 2012. Returning to Psychopathic as Boondox in 2014, Hutto released his fourth LP, Abaddon, featuring appearances by familiar faces like Big Hoodoo, ICP, Jelly Roll, and Syn. A year later, Hutto made the jump from Psychopathic to Majik Ninja. His first effort for Twiztid's label was The Murder, which arrived in early 2017. ~ Cyril Cordor & Neil Z. Yeung, Rovi