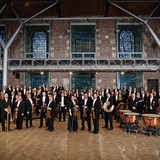 The London Symphony Orchestra was named by Gramophone as one of the top five orchestras in the world. The LSO has an enviable family of artists; our conductors include Sir Simon Rattle as Music Director, Gianandrea Noseda

and François-Xavier Roth as Principal Guest Conductors and Michael Tilson Thomas as Conductor Laureate.   LSO Live is the London Symphony Orchestra’s own record label and uses the latest technology to capture the orchestra’s most exciting performances. Launched in 1999 with the aim of reaching new audiences for classical music as well as dedicated listeners.   We also have long-standing relationships with some of the leading musicians in the world – Bernard Haitink, Anne-Sophie Mutter, Mitsuko Uchida and Maria João Pires, amongst others.   The Orchestra is self-governing and made up of nearly a hundred talented players who also perform regularly as soloists and in chamber groups at LSO St Luke's. The LSO is widely acclaimed by audiences and critics alike.