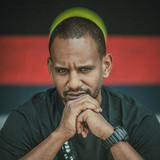 BrothaBlack is one of Australia’s pioneers of Indigenous Hip Hop. He is a founding member of Indigenous Hip Hop crew, South West Syndicate. In 2007 he released his first solo album ‘More Than a Feeling’ featuring the breakthrough single ‘Are you with me out there’ fast becoming an anthem for underground Hip Hop goers and added some genuine south-west side grunt to the soundtrack for Foxtel’s smash hit TV series, ‘Dangerous’. He has received extensive airplay on Triple J including performing a set for Live at the Wireless, broadcast in 2007. Brothablack is also an accomplished actor and performer with more than 200 performances under his belt. He featured on the Foreign Heights track "Get Yours (Remix)" nominated for the 2007 ARIA Award for Best Urban Release. Brothablack also appeared as the studio host in Move It Mob Style® seasons 1, 2 and 3 nominated in 2012 for The ASTRA Awards Most Outstanding Children’s Program or Event and in 2014 for Most Outstanding Children’s Program at the 56th annual TV Week Logie Awards.