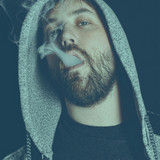 FOLLOWING THE LATEST TRENDS SIMPLY ARE NOT ENOUGH. From promoting events for some of North America's biggest names to performing his own music across Canada, Swish Styles continues to prove that you can carve your own path into the music industry. ​Born R.J Donaldson, Swish Styles grew up in the St. Catharines area of Merriton. Growing up diagnosed with depression and ADHD Swish was prescribed heavy amounts of Ritalin and other medications, the outcome became an antisocial and rebellious teenager who would spend most days secluded under a hoodie with headphones on blaring music from Savage Garden to Limp Bizkit. By the age of 18 Swish had discovered his ability to freestyle, believing this was the only talent he began to focus on bettering himself and writing songs. ​ By the year 2014, Swish was already a prominent Niagara promoter both assisting and managing local events. In 2015, Swish was nominated for the Rising Star Award at the Niagara Music Awards and went on to spend 2016 through 2018 performing all over Ontario and other parts of Canada. After the tragic loss of his mother to cancer in 2019, Swish decided to go back to his roots, and began to incorporate his early inspirations of rock, pop, and hip-hop into his music, he also signed a deal for management, distribution, and production, and began to work on his debut album.