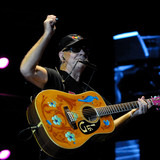 Argentine folk legend León Gieco is one of his country's most enduring national heroes. Though he is most treasured in Argentina, where his outspoken social consciousness and storied past as a fearless protest singer endeared him deeply to those who share his heritage, his appeal extends beyond his homeland: he performs to international audiences regularly and is often described in shorthand as "the Bob Dylan of Argentina." He first earned these comparisons with his debut album, León Gieco (1973), released by Argentina's premier rock label, Music Hall. Gieco recorded several more albums for the label during the mid-'70s, all of them popular, before he could no longer withstand the pressure of the Argentine government to censor his outspokenness. Like so many other Argentine artists of the time, he fled the country, finding sanctuary in the United States in the late '70s. He reunited there with Gustavo Santaolalla, who had produced his debut album, and in time, the two of them recorded songs for Pensar en Nada (1981), a triumphant comeback album that announced Gieco's return to Argentina. Throughout the early '80s, he toured the country from top to bottom and, with Santaolalla producing, documented his travels. Released as De Ushuaia a La Quiaca (1985), this documentary project showcases Gieco as a folk troubadour, performing acoustically alongside his countrymen. Much acclaimed, De Ushuaia a La Quiaca was followed by two further volumes, and Gieco continued his relentless touring, traveling to Europe and playing at a variety of festivals. Semillas del Corazón (1989) marked his return to conventional studio recording, and in the wake of that album's success he signed to EMI, for which he recorded a variety of albums in the years that followed. By this point, Gieco's legacy was firmly established as one of Argentina's most enduring national heroes, with his outspokenness in the face of government censure during the 1970s particularly treasured. Born Raúl Alberto Antonio Gieco on November 20, 1951, in a small town near Cañada Rosquín in the Santa Fe province of Argentina, Gieco learned to play guitar as a boy and was influenced by '60s rock bands such as the Beatles and the Rolling Stones. He moved to Buenos Aires when he was 18 years old, hoping to find success amid the city's burgeoning late-'60s rock scene. Upon his arrival, Gieco befriended Gustavo Santaolalla, then part of the band Arco Iris. In addition to Santaolalla, he became associated with other notable Argentine rock artists of the time, such as David Lebón and Litto Nebbia, and performed at the Buenos Aires Rock Festival several years in a row, from 1971-1973. León Gieco, released in 1973 by Music Hall and produced by Santaolalla, is a first-rate Argentine folk-rock album highlighted by "En el País de la Libertad" and "Hombres de Hierro," the latter a protest song. This debut album earned him his first comparisons to Bob Dylan. Several more releases followed for Music Hall: León Gieco y Su Banda de Caballos Cansados (1974), featuring his live band, comprised of Rubén Batán (bass), Vicente Busso (drums), and Rodolfo Gorosito (guitar); PorSuiGieco (1976), a supergroup recording featuring Raúl Porchetto, Charly García, Nito Mestre, and María Rosa Yorio, a group with whom he also performed in concert; El Fantasma de Canterville (1976), an album heavily censored by the Argentine government that nonetheless became a hit; and IV LP (1978), with the career standout "Sólo Le Pido a Dios." 7 Años (1980), a greatest-hits compilation, capped off his first decade as a recording artist. By the late '70s, Gieco could no longer withstand the pressure of the Argentine government, which targeted him incessantly and aimed to suppress his voice. He fled the country in 1978, going to Los Angeles for about a year's time. He reunited there with Santaolalla, who had also fled the country because of the military-led government's clampdown on outspoken artists. In Los Angeles, Santaolalla produced some songs for what would be released as Pensar en Nada (1981). Released by Music Hall, the album was very popular in Argentina, and Gieco in turn launched a three-year tour that would carry him 110,000 kilometers across the country, playing before an estimated 420,000 people. As he traveled the country during the early '80s, Gieco was joined by Santaolalla, and together the two recorded De Ushuaia a La Quiaca (1985). For the documentary project, they traveled from the southernmost region of Argentina (Ushuaia, in Terra del Fuego) to the northernmost (La Quiaca, along the Bolivian border). Throughout their travels, they recorded folk musicians in their own environment; Santaolalla produced the project, using generators to power his mobile recording equipment. The project ended up resembling the Cuban Buena Vista Social Club (1997), with Gieco taking on the role embodied by Ry Cooder in the latter. De Ushuaia a La Quiaca was successful on several counts. It spawned a pair of follow-up volumes, not to mention several television programs, and its importance grows with each passing year. During the late '80s, Gieco continued his relentless touring, traveling to Germany for multiple tours, in addition to shows throughout Latin America; he also performed at a number of international festivals. He finally returned to the studio at the end of the decade to record Semillas del Corazón (1989), his first conventional studio album in eight years. Then came a two-volume live recording from 1989 pairing him with American folk hero Pete Seeger, Concierto en Vivo (1990); the album was recorded in Buenos Aires, yet they toured the United States subsequently. Around this same time, Music Hall capitalized on Gieco's presently high profile with another greatest-hits compilation, Ayer y Hoy (1989). In the 1990s, Gieco moved to EMI for Mensajes del Alma (1992), Desenchufado (1994), and Orozco (1997). He remained with the label in the years that followed, though his output slowed; nevertheless, notable studio albums arose from time to time, such as Bandidos Rurales (2001) and Por Favor, Perdón y Gracias (2005), as did live recordings (El Vivo de León [2003]) and back-catalog compilations (15 Años de Mi [2006]). Also, a deluxe edition of De Ushuaia a La Quiaca was issued in 2005. ~ Jason Birchmeier, Rovi