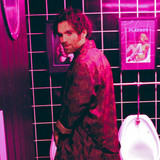 Having exploded onto the scene in 2018 with the release of his EP Heddison, featuring key tracks Greatly Hasty and Oxytocin, which now sits at over a million Spotify streams - Hull born / Manchester based singer-songwriter Jack Conman went on to receive love & support from Huw Stephens on BBC Radio 1, perform at BBC Radio 1’s Big Weekend and make CLASH’s coveted Next Wave feature. Then having taken time to refine his songwriting talents & as we climb out of lockdown, Jack releases Come Back In The Room, the 1st single from his upcoming debut self-produced album Seventh Sense Libido, due out later this year. Come Back In The Room is a quintessential song of heartbreak, featuring a dulcet guitar arrangement that underpins Jack’s unrefined, husky tones, dappled with his Yorkshire twang. Recorded in his ex-girlfriend’s bedroom at the beginning of lockdown, Jack took only an hour to write the song but then spent two days with microphone & guitars sprawled out around him, layering up all the vocals & instruments. Now, with his debut album Seventh Sense Libido on the horizon, it’s time Jack Conman slipped back into the lexicon of music fans.