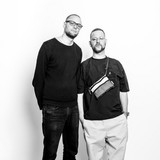 Hybrid club music for big soundsystems – that's the essence of Schlachthofbronx. All the way from their start in 2008 up to their fourth studio album Haul & Pull Up , the DJ and producer duo from Munich demonstrate how versatile a sound can be that is nonetheless deeply rooted in soundsystem culture and their various local offsprings, reaching from Reggae & Dub over HipHop to Footwork, Garage, Grime and other forms of Bass Music. Having followed that with a recent ten-year-anniversary release as well as a couple of highly sought after club bits, Jakob and Benedikt keep paying their respects to the originators all the while clearly formulating a futuristic sound of their own - which they will surely repeat with some exciting new singles coming in 2020... COME IN! Having journalists (and info text writers) struggling to put a genre tag onto their music as a trademark, Schlachthofbronx effortlessly float through conventional style classifications and tempi in their tracks. With their latest album Schlachthofbronx follow up their three previous original albums (2009s Schlachthofbronx , 2012s Dirty Dancing and 2014s Rave and Romance

), completed by EPs & singles for Labels like Mixpak, Modeselektors Monkeytown, Mad Decent, Disko B and Man Recordings as well as production work for artists like M.I.A., Snoop Dogg, Fünf Sterne deluxe or Bonde Do Role