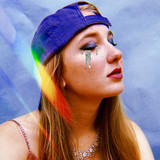 Singer-songwriter Hanna Ross began her romance with creativity by writing poems focused on important matters such as fudge and fireflies. It was not until a couple years later that Hanna picked up the guitar her grandfather had given her and began turning those poems into songs. It was on that guitar that she wrote her breakout single Shawn Mendes, the pop country ear worm released in late 2016 that was quickly discovered by Shawn Mendes fan pages across social media platforms.   Shawn Mendes was followed by Hanna’s first EP Some Random Girl and Stranger Things (an ode to the Netflix series by the same name). Since then, Hanna's sound has evolved to combine pop melodies with imaginative and relatable lyrics. Her most recent singles are a collection of effervescent bops (Dripping in Diamonds, 1998, Venom (feat. Madge Ross) that glisten under a layer of pop-frosted production while maintaining authenticity through honest, poetic lyrics. While Hanna cites Ed Sheeran and Michelle Branch as her major musical influences, Amy Winehouse, Cake, and beabadoobee also drip from her headphones in a constant loop.   In addition to her solo project, Hanna is one half of acoustic pop sister duo Hanna x Madge. Together, they have performed at many venues across the globe, from the historic Bluebird Cafe and the Crane Bar in Galway, Ireland to nursing homes and schools across America.