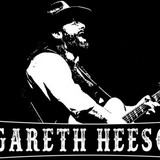 "When it comes to UK Country Gareth Heesom is right up there with Ags Connolly" - Malcolm MacWatt 2020 Gareth started his writing in 2014, taking a blend of traditional country music and adding in a bit of his uniqueness, rawness and a touch of the modern. Ensuring he kept the most important part, the truth. His first release "A Million Butterflies" was born from a visit to Halton Haven Hospice in Gareth's home town of Runcorn, having given his time to play some songs on a charity day, Gareth witnessed a butterfly release on the day, which was performed once a native American legend had been told of butterflies carrying a wish to the Great Spirit. Gareth was so moved and inspired by seeing and hearing this, that his brain immediately begun creating the song. Released in October 2017, all income Gareth receives from this song are donated to Halton Haven Hospice. His second single "Billy's Girl" is a song that tells the story of Gareths maternal grandmother, Sylvia and her love for one man, Billy, and his love for her. The song came to Gareth as he sat next to his nan on her final day, words flooding in to his brain. The song would go on to be played at Syvlias funeral, and Gareth has often told how creating and recording the song is what gave him his strength during those first days and weeks. Other singles have followed and Gareth is currently working in the studio with his new band Influences of Don Williams, Johnny Cash and Chris Stapleton