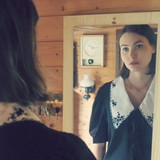 Emma Longard is a German recording artist and songwriter, who can be placed somewhere between pop, jazz and blue-eyed soul. Her new mini-album "Quieter Pt. 2" follows after the release of "Quieter Pt. 1" earlier in 2021, with many of the tracks being brand new, written only months ago during the pandemic, while others are a bit older, including a track written with Danish artist Lukas Graham and another one with LA-based Kenny Carkeet. While "Quieter Pt. 1" was based all around the theme of overcoming a personal crisis, in "Quieter Pt. 2" Emma talks about relationships. Straying from her beloved acoustic piano, she also opted for the occasional synthesizer and programmed drum among the arrangements of the new six songs, all produced in Hamburg by Fabio Niehaus at 106Hz Studios. Over the years and especially after the release of her debut album "A Million Pieces" in 2015, Emma has been a familiar face in the German live-music scene. She played well known Reeperbahn-Festival, as well as support-slots for the likes of Michy Reincke or Danish artist Mads Langer and her own club tour. Since the pandemic, Emma hasn't been able to get back on the road again to present the new songs, but it's next on the list, as soon as it's possible. Because, after all, music only sounds half as good if you can't share it with anyone. "Gefördert durch die Initiative Musik gemeinnützige Projektgesellschaft mbH mit Projektmitteln der Beauftragten der Bundesregierung für Kultur und Medien."