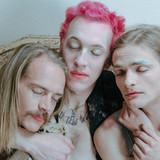 It’s always good news to bear witness to how a young rock group from the middle of the country could tap so readily into a something-for-everyone aesthetic and so deftly ride it to its mark- all while creating their own unique sound in the process. Such is the helm seized by The Captain’s Son, a trio hailing from Long Beach, California.  Taking their name from both Woody Guthrie’s “Muleskinner Blues” and Star Trek: Deep Space 9, the band was officially formed in late 2015, before nascent buds guitarist/vocalist, Paige Byrd, bassist/vocalist, William Hopkins, and drummer, Jarred Hayden made their crosscontinental exodus from the native Southern Missouri hometown in which they’d been languishing to the left coast. Byrd, Hopkins and Hayden were restless and, after stringent deliberation that involved disappointing girlfriends, and leaving jobs, families and bandmates, they ended up in Long Beach, somehow without getting themselves into any irreparable trouble on the way. It’s a cliche, perhaps, but only because cliches are born of a million unique realities.  Gracefully cresting over about a half dozen sub-genres including punk, surf, psych, ‘50s vocal groups, ‘60s soul pop, ‘70s in Laurel Canyon, ‘80s post-punk, and beyond, it wouldn’t be unusual to catch a bit of Wall of Voodoo mashed with Dion and the Belmonts, or Violent Femmes taking on early Sublime in one sitting.  The Captain’s Son’s self-produced debut album, “Feel Good Slam-Pop For Animals” is set for release Fall 2019