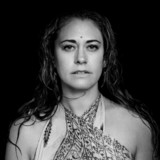 Akasha is the title of Leigh Lesho’s sophomore album that was released on 10/10/18. She is the writer and producer of the project with contributions from other stellar artists based in Tucson, AZ. These artists include Oscar Fuentes on guitar and mandolin, Thoger Lund (Giant Sand) on upright bass and cello, Lauren Wilson on percussion, Heather Hardy on fiddle, Gabriel Sullivan (XIXA) on electric guitar, along with many more special guest contributions. Akasha is the Sanskrit word for the "space/ether" element, which is directly related to the sense of hearing and our human speech. The overall message in the story of Akasha is one that hopes to inspire consideration and regard for the voice and the ability to verbally communicate as a sacred gift. Most people are granted the ability to speak, so it’s usually taken for granted. Speech is a powerful form of energy and both are very important topics for Leigh because she has been a devoted yoga student and teacher for most of her life, and her nine-year-old son Rylan has autism with his biggest challenge being speech. The process of recording and performing music serves as an outlet for Leigh and her life’s work while simultaneously serving as an example and mode of therapy for Rylan as he continues to find his voice.