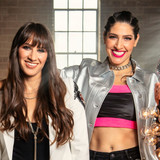 Hanna and Ashley Perez Moza were born in Lake Charles, Louisiana. From a young age, they both felt a strong pull toward a life in music. They began singing in their home church at the ages of five and six. The girls were met with such a strong reception that they began to perform regularly. In doing so, they began taking their craft more seriously and sought out professional instruction. Winning local competitions, followed by regional festival invitations in their early teens, created a buzz around Hanna and Ashley. Their first demo recording soon fell into the hands of A&R at Sony Music. Impressed with the talented adolescents' mix of rock, pop, and country, Sony signed the ladies, calling them Ha*Ash. Their self-titled debut album, under the direction of Aureo Baqueiro, was released in 2003. The record's first single, "Odio Amarte," was a radio hit all over the country, and opened doors for important live and television appearances. Among those opportunities was the recording of the musical theme for the animated film Magos y Gigantes. A number of hit singles later, Ha*Ash were pleased to see their first record go platinum, selling better than 140,000 copies. A year later, the girls released their second album, Mundos Opuestos. While the album didn't sell quite as well, Ha*Ash remained a popular touring entity setting the stage for further chart activity. In 2008, their full-length Habitación Doble peaked at 14 on the Latin Pop Albums charts. While its first single, "No Te Quiero Nada," scored near the top of the Mexican Airplay charts, their second, "Already Home" with Brandi Carlisle, was a massive digital success after being officially downloaded hundreds of thousands of times. 2011's A Tiempo, co-produced by Aureo Baqueiro and Michele Canova, featured collaborations with Leonel Garcia (of Sin Bandera), and Natalia Lafourcade. The video for its fourth single, "Te Dejo en Libertad" with Alejandro Fernández, received over 15 million views, propelling the album to a Top Five spot on the Mexican charts and resulted in both a two-year tour of Latin America and a deluxe edition being issued in 2013. After an extended break, the sisters re-entered the studio and emerged with Primera Fila: Hecho Realidad in 2015. While it peaked at 16 on the Latin Pop Albums chart, the record was notable for the many prize nominations and awards it received, including three Vevo Certified Awards for all three singles -- each reached over 100 million views, an MTV Agents of Change Award, a Premios Juventud for the single "Perdón, Perdón," and nominations for Group or Duo of the Year from Latin Billboard and Premio Lo Nuestro. Ha*Ash received thousands of press accolades for their charity work as well. In 2017, they issued 30 de Febrero, which features collaborations with Abraham Mateo on the title track and Prince Royce on "100 Años." ~ Evan C. Gutierrez