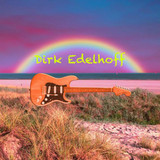 He is the epitome of versatility: the guitarist Dirk Edelhoff is already an old hand in the rock, jazz and blues scene. His technically highly qualified music playing was recognized at a young age and twice honored with the "Jugend Jazzt-Preis" of the "NRW State Competition". Dirk Edelhoff has been sharing his years of experience in the music industry in courses and workshops at his guitar school in Schwerte since 1998. The live and studio musician also composes film, advertising and popular music and works as a columnist for the journal "Gitarre und Bass". In 2012 Dirk released his technically impressive album "Different Colors", in which many of his experiences and experiences flowed. As a member of Soulballads, Go Music (Martin Engelien) and various other bands, the all-rounder is currently touring the country. www.dirk-edelhoff.de