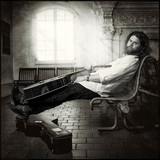 South Florida singer/songwriter Micah Scott was raised in a small northern New York State town with Revolutionary War bones in its fields. Born in 1978, he had retro taste early, drawn to The Ventures, Creedence Clearwater Revival, and the Beatles. In the 90’s Micah was attached to a Fender Stratocaster and doing his best take on guitarist like Jimi Hendrix, Frank Zappa and Muddy Waters. When his guitar teacher turned him onto Blind Lemon Jefferson and Robert Johnson, the die was cast. Today, he counts as seminal influences Muddy Waters, Big Bill Broonzy, Mississippi John Hurt and John Fahey. Armed with an honors degree from the Crane School of Music, Micah moved to South Florida and began getting roots- music cred playing every gig he could. Dim, greasy dive bars. Then more upscale blues clubs; and finally, music festivals. Seven years later, he co-founded a popular South Florida band called The KillBillies, which has grown a grass-roots following along the coast. In 2016, Micah made his first solo album, Dark Horse, on a break from an East Coast solo tour. It was recorded over three weeks in Philadelphia—another place steeped in American history. The album debuted at #1 on the Amazon Roots-Rock chart, and the single, Step Outta Line, came in at #1 on the Amazon Alt-Country and Americana chart.