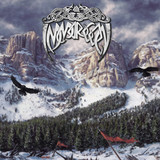 Immorgon was born by the end of summer of 2012, gathering all the initial membres in a smalll rehearsal room in order to define the sound that would mark the starting point of the band. The first recorded material was unveiled on 2014, when the EP “The Everchosen” saw the light. After two years, around 2015, Immorgon joined forces with Moontower Studios to release the first LP, called “And Thus We Ride”. This was a milestone on the band’s carreer, for it offered us the chance to play alongside many bands that initially were big influences on our sound, like Kampfar, Suidakra, Týr or Finsterforst, among others. Spanish festivals like Iberian Warriors Metal Fest and Folk Fest were a highlight among others, but the first time Immorgon crossed the spanish border was to perform at the slovenian Metaldays Festival on 2017. We returned to slovenian soil to perform at Winter Days of Metal on 2018 as reward for our performance on Metaldays. 5 years after the publication of And Thus We Ride, Immorgon returns to the charge with a second long duration called “As Shadows Fall”. Exploring new sonorities and redefining their style by displaying a renewed melodic death / black metal of pagan inspiration. What comes next, only the gods know.