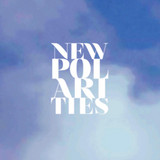 Do you ever feel like leaving this planet behind, if only for a moment? Delve into space and let all your troubles disappear behind the infinite curtain of stars? It is exactly this desire that the Swiss Band NEW POLARITIES have captured in the Bands upcoming first full Album “Œ”. The first singles are now giving a glimpse on things to come. The songs reflect on the powerful feeling of coming home, life and death and feeling at ease with what one has become and the connection to everything that surrounds us. After entering the independent scene with a bang in October 2015 with their debut EP ‘Narcissus’, NEW POLARITIES have soon after released the counterpart EP ‘Echo’ in early 2016. While the band from Baden in Switzerland started off with a barrage of fireworks their second creation promised to delve deeper into calmer realms, quieting the rushing waters of their sound as they explore the unfathomable depths that lie beneath.