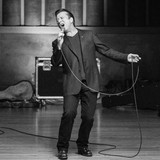 If only one singer could be selected as the most identifiable with '80s arena rock, it would have to be Journey's Steve Perry. Born Stephen Ray Perry in Hanford, California, on January 22, 1949 (to Portuguese parents), Perry was raised in another California town, Lemoore, during which time he worked at his stepfather's turkey ranch. But by the age of 18, Perry wanted to try fulfilling his rock & roll dreams, so he relocated to Los Angeles. The singer paid the bills by lending his vocals to radio and TV advertisements, as well as working as an engineer at Crystal Studios. In addition to singing, Perry was also a drummer and involved in several different bands during the '60s and '70s, including such obscure local acts as the Nocturns, Dollar Bills, Sullies, Ice, Pieces, and Alien Project, the latter of which was on the verge of signing a recording contract when the group's bassist died in a car accident, promptly leading to the group's breakup. Dejected, Perry gave up on music completely and returned to Lemoore to work once more at his stepfather's turkey ranch. But at his mother's insistence, Perry decided to give music another try. Just as he came to the realization, the manager of the prog rock/fusion act Journey, Herbie Herbert, contacted Perry to see if he'd like to try out for the lead singer spot in the group. Perry was eventually welcomed into the band and Journey's sound shifted away from their early indulgent style and toward a more focused mainstream rock sound. The move paid off; over the course of several albums (1978's Infinity, 1979's Evolution, and 1980's Departure), the Perry-led version of Journey became one of the top U.S. arena rock bands. Founding keyboardist Gregg Rolie was replaced by former Babys member Jonathan Cain shortly thereafter, which would result in Perry finding a perfect songwriting partner. Just when it appeared as though Journey couldn't get any more popular, Journey scored two of the biggest rock records of the early '80s back to back -- 1981's Escape and 1983's Frontiers -- which confirmed what fans had known for several years: that the group members were the undisputed kings of arena rock (as the two albums spawned such massive hit singles as "Don't Stop Believin'," "Who's Crying Now," "Open Arms," "Separate Ways," and "Faithfully"). While Journey was on a brief break from touring and recording around this time, Perry issued his first solo album in 1984, Street Talk, which unsurprisingly sounded almost identical to Journey and spawned a sizable hit single with "Oh Sherrie" (as well as another minor hit, "Foolish Heart"). Journey regrouped in 1986 for Raised on Radio, and although the album was another sizable hit, it was noticeably not up to snuff when compared to their previous stellar releases. Sensing this themselves, Journey quietly broke up shortly thereafter. Little was heard from Perry subsequently, as a sophomore solo effort slated for release in 1988, Against the Wall, was ultimately shelved. Journey remained out of commission for several years while a pair of compilations, 1988's Greatest Hits and 1992's box set Time 3, proved to be steady sellers. Perry finally got around to issuing a second solo album, For the Love of Strange Medicine, exactly ten years after his solo debut. In 1996, Journey regrouped for a new studio recording, Trial by Fire, and a proposed tour. But shortly before the tour was to get underway, Perry discovered that he had a degenerative hip condition, which effectively squashed all plans for a reunion tour (Perry's unwillingness to get corrective surgery right away ultimately led to his ousting from the group, as Journey would soldier on with Perry clone Steve Augeri behind the mike). Perry contributed a pair of tracks to the soundtrack for the 1998 Disney animated film Quest for Camelot before a Perry compilation, Greatest Hits + Five Unreleased, was issued later the same year. Perry was interviewed in the early 21st century for an episode of VH1's Behind the Music that focused on Journey, during which the singer told his side of the story of his ousting from the group and the happenings behind the scenes. Apart from appearances on albums by Jeff Golub and David Pack, Perry stayed quiet through much of the 2000s. He started to resurface in 2014, appearing onstage with Eels at a concert in St. Paul, Minnesota. The following year, he revealed that he was working on a new album. That record, his first in 24 years, was entitled Traces and appeared in October 2018. ~ Greg Prato, Rovi