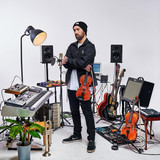 Kruger James is a concert violinist that makes rap music. That means he's a beatmaker / rapper / instrumentalist. His last release from 2018, "Emptybars Vol. 3", was a mammoth 41 track double album of rap instrumentals where he played every instrument. He's known as a beatmaker that works with some of Perth's best vocal talent; Mathas, Marksman, Beckon, Silvertongue, Skyuka, and Queency all have tracks featuring Kruger James's production. This next year sees even more in the pipeline of Perth artists releasing music produced by Kruger James. In terms of his own catalogue, he's rapped on Mixtapes (Empty - The Mixtape, 2011), with a live band and string section (The Empty Cup - Sojourn, 2013), and released his first full length first solo rap album (Slouching Toward Nirvana, 2017), AND produced a series of instrumental albums called "Emptybars" (2012 - 2018). Emptybars Vol. 4 being currently in the works. He's won PDMAs and WAMIs, played violin and viola for London Grammar and the Hilltop Hoods, written music for short films and so much more. Lastly, and this could stand on it's own as a landmark achievement, he runs "Colab", the 10 year running freestyle night at The Moon Cafe with a live band that features a roster of over 60 artists, and is on every two weeks without fail. His skills as a freestyle rapper are revered.