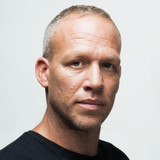 Jazz bassist, composer and singer, Avishai Cohen plays a sophisticated mix of post-bop and contemporary jazz infused with Middle Eastern traditions. Born 1970 in Israel, Cohen grew up in a multicultural family. He started on piano at age 9 moving to the bass inspired by Jaco Pastorius at 14. He caught the attention of Chick Corea and became a member of his sextet Origin in NYC, at 20. Cohen made his solo debut with Adama 1998 followed by Devotion 1999 and Colors 2000 introducing his International Vamp Band with Unity 2001. In 2002 he formed his own label RazDaz Recordz, releasing its debut Lyla 2003, followed by At Home 2005 and Continuo 2006, both displaying various genres from jazz to ethnic fusion. He returned to Israel, releasing Sensitive Hours 2008. Also in 2008 the Gently Disturbed trio album achieved a masterstroke that redefined the concept of jazz. Cohen moved to Blue Note for Aurora 2009, in which he expressed himself as a singer. In 2011 he released Seven Seas. He then invited Nitai Hershkovits (p) for Duende 2012. The classical, Middle Eastern-tinged Almah arrived a year later. He reunited with Hershkovits and Daniel Dor (d) for From Darkness 2015. 2017’s Sony album 1970 featured his vocals with rock and Sephardic influences. He returned to a trio with horns setting for Arvoles 2019 with Noam David (d) and Elchin Shirinov (p). With Two Roses (2021), Avishai combines his core trio (Mark Guiliana, Elchin Shirinov) with the Gothenburg Symphony Orchestra.