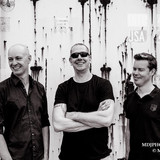 Featuring I Against I

In 1994 I against I was founded in Dordrecht, a town in The Netherlands close to Rotterdam. Bob, Jasper and Ronald found the best way to get rid of their (teenage) energy was by playing up-tempo, melodic punk rock songs. Before they knew it they were the first European band ever to sign a contract with Brett Gurewitz’s label Epitaph Records. A dream came true, since Epitaph happened to be home to all of their favourite bands. Bill Stevenson and Stephen Egerton of the Descendents produced I against I’s debut album Headcleaner which became a punk rock classic, featuring songs like Maybe Tomorrow and Nailed to the floor. In the following years two more records saw the light of day, and hundreds of shows took I against I throughout Europe, playing with bands such as Descendents, ALL, Down by Law, Bad Religion, Undeclinable Ambuscade. A new album is slotted for release October 5th 2018 on White Russian Records. First single "HEY" is out now!