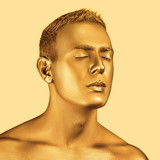 Iconic, ethereal, and timeless, Nicola's music leaves the listeners in a dream-like state of mind. Known for his unique voice and singing ability, Nicola is considered one of the most interesting voices in the international music scene. Born in Italy and based in the UK, he started studying piano when he was a child. The years passed at the Conservatory of Music in Cagliari laid the basis for his trademark sound. His teachers discovered his vocal talent when he was just 13; since then, Nicola started studying with some illustrious Opera Singers first, then modern vocal techniques with some brilliant private vocal coaches. His debut album, "Since Before Creation," out on the 9th of June, 2006, gained international airplay and drove significant attention to his voice and music. Nicola kept working on his singing and songwriting. Due to problems with his label, his second album's release date had to be postponed. "No Compromise," out on the 9th of October 2010, followed by a new Mini-Album titled COLORS, out on the 31st of January, 2014, introduced his second album, NICOTOMIA, out on the 15th of January, 2015; the album received international recognition, reinforcing Nicola's worldwide fan base. BACK TO THE STARS, Nicola's first EP from his upcoming new album THE MIND TRAVELLER is out on the 12th of January, 2020! After the worldwide success of COLORS and NICOTOMIA, Nicola is back stronger than ever with a three tracks EP that anticipates his new album due in 2021.