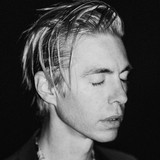 If Joe Cardamone’s entire musical output was transmuted into a speech it would be spoken by one of Skid Row’s finest misfits, stuttering and stammering, spitting vitriolic truth bombs out on the uninterested swathes of other homeless bodies herded and crammed into one block of DTLA. But with the grit of the music comes also an eloquent and even organised attack on the banal and the mundane; from the fully-fledged combative aural assault of his formative punk years to the more nuanced but still urgent output of the latter years, Cardamone is doubtless a unabashed pioneer of originality, bucking trends in favour of carving niches. As a Los Angeles native Cardamone is well-versed in the dichotomy that exists in his hometown; the Hollywood glitz versus the gangland violence. “I’m an East-sider. When I was young, In the neighbourhood where I grew up I was scared to walk down the street... We grew up in LA but not the LA that held inroads for sons and daughters of the connected. East Los Angeles might as well be a million miles from Hollywood.” From this duality sprouted Cardamone’s own penchant for experimentation between genres which would eventually lead to him disbanding The Icarus Line after 17 years to focus on his solo R&amp;B, rock, rap, industrial project. An aural attack, underpinned by industrial beats and glitch synths – it sets out the manifesto for Joe’s forthcoming recordings in a very forthright manner.