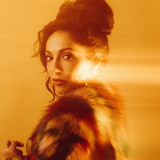 Since her first violin lesson at age three, Nacer has been immersed in a musically diverse world that established her early on as the rare kind of singer/musician who is comfortable in any genre. Yvette writes and sings with a soulful integrity and has performed with some of the industry’s biggest names including Jason Mraz, Ne-Yo, Wyclef Jean, Gloria Estefan, Engelbert Humperdinck, All-4-One and Justin Bieber among others. Yvette’s songs have been heard on a variety of films and TV shows, Sirius XM, and various feature films, including Dan Fogelman’s theatrical release “Life, Itself.” She won the prestigious John Lennon Songwriting Contest and has been signed to BMG Publishing (Topline) by the multiplatinum hit songwriter/executive-producer Billy Mann. The multifaceted artist is also an award winning actress, having landed such coveted roles as Cha Cha in Fox’s star-studded cast of Grease: Live, Vanessa in the 1st Nat’l Broadway tour of In the Heights, and Kiki in the beloved Emmy Award Winning TV series The Fresh Beat Band, to name a few.