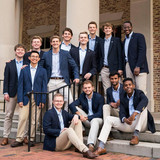 In the Fall of 1977, a group of Chapel Hill students joined together to sing in close harmony around campus. Four decades later, Carolina's oldest a cappella group maintains the same mission on an international scale. In the Spring of 2019, the Clefs released their 22nd studio album, Blank Canvas, and continue to grow an online presence. To keep up with the current group's content, follow their Instagram (@clefhangers) or find them on Facebook at "UNC Clef Hangers". Songs from six separate albums have been featured on a total of eight Best of Collegiate A Cappella Compilation CD's, and in 2004, The Clef Hangers received their first Contemporary A Cappella Recording Award (CARA) for “Best Soloist” with the song “Easy.” Since then, the Clefs have won two CARA's for "Best Male Collegiate Song" with "My Love" and "Ain't Nothing Wrong With That." In addition, their album Twist has received runner-up CARA's for "Best Male Collegiate Album," "Best Male Collegiate Song" ("Nude"), and "Best Male Collegiate Arrangement" ("Boondocks"). Since their first tour to New Orleans, Louisiana in 1980, the Clefs have performed for audiences in Iceland, Sweden, Spain, France, Scotland, Greece, Italy, Los Angeles, Washington, D.C., New York, Boston, Philadelphia and numerous other locations. The group has enjoyed multiple notable performances, such as the White House Holiday Party for President Obama, The Dean Smith Memorial Service, and a personal performance for the President of Iceland.