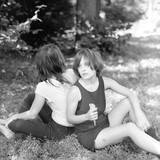 Jolly Goods are the siblings Tanno and Angy Lord. They founded Jolly Goods in 2003. Their debut album „Her.Barium“ was released on the berlin-based label Louisville Records in 2007. They played concerts in Germany, Austria, Switzerland, France and Sweden, all via Konzertagentur Berthold Seliger, including appearances at Volksbühne in Berlin, Palladium in Cologne for WDR Rockpalast, Fleche dor in Paris (FR) and a Girls Rock Festival in Alexandria (Egypt). Jolly Goods became part of the organization and bandcoaching team of Ruby Tuesday Rock Camp for girls, trans * and inter* in Berlin and were part of the theatre rock opera "Peaches Does Herself“ by Peaches at HAU Berlin. In November 2011, their second album „Walrus“ was released on the Berlin label staatsakt. Hans Unstern and Dirk von Lowtzow ( Tocotronic ) were co-producers. Moses Schneider designed the sound. The release was followed by a tour in Germany, Austria and Switzerland with two additional musicians, who played contrabass, organs and keyboards. Their self-made video for the single „Try“ won the MuVi prize of „Internationale Kurzfilmtage Oberhausen“.

In 2012 Jolly Goods played concerts in Canada, the US and Germany. Their new album Slowlife will get released on the 17th of January, 2020 on Siluh Records.