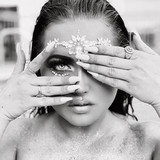 Melissa has a very special connection with music, and for a reason that you may not expect. Since the age of five Melissa had suffered from a debilitating case of Body Dysmorphic Disorder. After endless years of seeking treatment a pivotal time finally arose in her life. She was attending one of many outpatient programs, and this one was a long two hour drive away. It was on these car rides to treatment that she discovered something incredible. She found that what gave her hope wasn’t the treatment itself, but driving to get there. She would blast her favorite dance driven tracks sung by her idols Lady Gaga, Christina Aguilera, and Britney Spears, and she would enter another world. She escaped to a place where she could embody a sexy, confident, fearless female. She was taken from feeling invisible to being invincible. But most importantly Melissa was brought somewhere where she felt beautiful. Years have passed since then and Melissa has finally conquered her Body Dysmorphia, but she will never forget the key component that helped her heal, music. Melissa now sees it as her turn to help others struggling with similar obstacles. Melissa is now on a mission to give back those nostalgic pop anthems that saved her life.