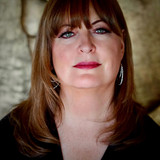 ANN HAMPTON CALLAWAY is one of America’s most gifted artists in pop and jazz. A leading champion of the great American Songbook, she’s a singer, pianist, composer, lyricist, arranger, actress a TV host. She is best known for Tony-nominated performance in the hit Broadway musical “Swing!” and for writing and singing the theme song to the hit TV series “The Nanny.”

She made her feature film debut opposite Angelina Jolie and Matt Damon in the Robert De Niro film "THE GOOD SHEPHERD" and was in the soundtrack of Wayne Wong's "LAST HOLIDAY", starring Queen Latifah. Ann can also be heard singing her original song “Pourquoi” in the soundtrack of “BLIND” starring Alec Baldwin and Demi Moore. Callaway is a Platinum Award winning writer whose songs are featured on seven of Barbra Streisand's recent CD's. The only composer to have collaborated with Cole Porter, she has also written songs with Carole King, Rolf Lovland, Amanda McBroom and Shelby Lynn to name a few. Ann has recorded over 50 CDs as a soloist and guest and her new CD Jazz Goes to the Movies debuted at #12 on the Billboard Jazz Chart and has been in high rotation on Siriusly Sinatra.