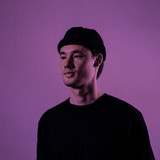 At an early age Rotterdam born producer Glimlip never imagined himself becoming a beatmaker. Starting off playing the drums and guitar, music was nothing more than a playful way of spending his time. A few years further down the road it would be impossible though to speak about him without thinking of his soulful/jazz influenced beats inspired by the likes of J Dilla, Flying Lotus, Madlib and Kiefer. He just released his debut album "Undertones" made in collaboration with Yasper, which is now available on vinyl. Find the pre-order link in his Instagram bio (@glimlip). Pictures by Jonathan de Waart.