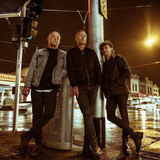 "Australia has a happy knack of throwing up oddball, idiosyncratic bands that initially appear limited by an inability or unwillingness to fit into the cookie cutter yet, in time, find fans enough to lift them to folk hero status. Apart from just being a red hot rock band, it’s that character that propels The Peep Tempel and adds flesh to their tales of disaffection blues." — Aunty, Golden Plains 2017. The Peep Tempel is a punk rock band from Melbourne, Australia. The band are Blake Scott (vocals, guitar), Steven Carter (drums) and Stewart Rayner (bass guitar). The band formed in 2008 as a two-piece by singer-songwriter Blake Scott and drummer Steven Carter who were neighbours at the time. As a three-piece, the band have released three studio albums: The Peep Tempel, Tales and Joy.