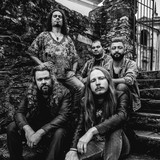 Pesta is a Doom / Stoner band formed in the mountainous city of Belo Horizonte (Brazil) in 2014, the main motivation was to pay tribute to some bands from the 70s and 80s, like Pentagram, Cathedral, Trouble and the great, Black Sabbath, in a sound that moves between Stoner Rock, Classic Doom Metal and Seventies Hard Rock.  Pesta has released the EP - “Here she comes ...” in 2015 and a full album: “Bring Out Your Dead” in 2016, this one was released in Europe in 3 vinyl editions by the French label Black Farm Records and in Brazil by Death Time Records in CD, B.O.Y.D. had an excellent repercussion from the specialized critics on several sites and blogs around the world. Pesta released in 2016 the video clips of the songs Black Death and Psycopathy.   In 2019 the last album “Faith Bathed in Blood” and the single “Nightmare” were released, a version of the song of the same name by the iconic Brazilian Black / Death Metal band, Sarcófago. We ended that year, in more than 20 national and international sites /blogs and channels lists among the best releases, for this last album the music videos of the songs Hand of God, Blood Mists /Moloch's Children and Anthropophagic was released.   Follow us on socials https://linktr.ee/pestadoom