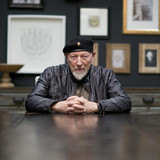 An iconic figure in British folk-rock, Richard Thompson is arguably the genre's greatest triple threat: a dazzling guitarist, an outstanding songwriter, and a strong and evocative vocalist. As one of the founding members of the group Fairport Convention, Thompson would have a seismic impact on both U.K. folk and rock, incorporating elements of traditional music (most effectively on 1969's Liege and Lief) in a way that sparked a new interest in authentic British folk. After leaving Fairport, Thompson recorded a series of albums with his spouse Linda Thompson that established him as an estimable guitarist and tunesmith; while they were a favorite with critics (especially with 1974's I Want to See the Bright Lights Tonight), the sales of their albums were usually dismal. With suitable irony, the couple was experiencing a commercial breakthrough with 1982's Shoot Out the Lights when their marriage rancorously ended. Richard launched a solo career in earnest with 1983's Hand of Kindness, and through the '80s and '90s, thanks to an increased touring schedule, better promotion of his releases, and livelier production (often from frequent collaborator Mitchell Froom), Thompson's cult following grew considerably, and his song "1952 Vincent Black Lightning" (from 1992's Rumor and Sigh) became a folk and bluegrass standard, especially after it was covered by the Del McCoury Band in 2001. After more than a decade recording for Capitol Records, Thompson returned to an independent label with 2003's The Old Kit Bag, in which he returned to a more organic production style. Thompson wavered between acoustic projects (2005's Front Parlour Ballads) and more robust full-band efforts (2013's Electric), but despite his status as an elder statesman of the singer/songwriter community, he remained active and engaged as a writer and musician, releasing the powerful 13 Rivers in 2018, when he was 69 years old. Richard Thompson was born on April 3, 1949 in Ladbroke Crescent, Notting Hill, West London, England. His father, a detective with Scotland Yard, was an amateur guitarist who was fond of jazz (particularly Django Reinhardt and Charlie Christian) and traditional Scottish music, influences that would inform Richard's music in the decades to come. Young Thompson was also fond of rock & roll, and began playing guitar at a young age; for a while, his older sister dated a young man in a rock band, and Richard would sometimes get her suitor to teach him licks while his sister got ready for dates. While attending secondary school, Thompson joined his first band, a teen combo called Emil and the Detectives; their bass player, Hugh Cornwell, would later enjoy success as a member of the U.K. punk band the Stranglers. In 1967, Thompson would become one of the founding members of the group Fairport Convention, a group influenced by Jefferson Airplane that initially specialized in American-style folk-rock. Discovered by manager and producer Joe Boyd, Fairport Convention soon landed a record deal and released their self-titled debut album in 1968. By the time Fairport released their second album, 1969's What We Did on Our Holidays, original singer Judy Dyble had left the band, and Sandy Denny, one of the finest vocalists of her generation, took her place, and while Ian Matthews originally dominated their original songwriting, Thompson began contributing tunes like "Meet on the Ledge" and "Tale in a Hard Time" that would become standards in their repertoire. Unhalfbricking, released later in 1969, was an even stronger effort highlighted by a greater emphasis on traditional folk and their extended version of the traditional "A Sailor's Life," but between its recording and release, the band experienced a tragedy. After driving home after a gig in Birmingham, Fairport's van was part of an accident that claimed the lives of drummer Martin Lamble and dancer Jeannie Franklyn, who was Thompson's girlfriend. Other members of Fairport would experience injuries, and Matthews had already parted ways with the group, so the band added new drummer Dave Mattacks and fiddler Dave Swarbrick as bassist Ashley Hutchings dug deep into researching British folk songs. Released in December 1969, Liege and Lief was a masterpiece that found the group fusing rock and folk in a new and innovative way, and while Denny left before they recorded the follow-up, 1970's Full House, it was another triumph in the fusion of the genres.