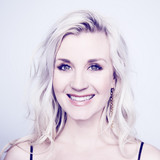 "West Side Story", "Sound of Music" and "Les Misérables" in Sweden and Norway. It was when Emmi played Cosette in "Les Misérables" Peter Jöback got his eyes on her talent and her potential for the international scene. Peter Jöback introduced Emmi Christensson to, among others, star music producer Sir Cameron Mackintosh, and it did not take long before she had her West End debut as "Christine" in "The Phantom of the Opera" at Her Majesty's Theatre in London, September 2014. In 2015, Emmi participated for the first time in Peter Jöback's Scandinavian arena tour "I Love Musicals" and in 2016 she played "Christine" again, this time in the Swedish production of "The Phantom of the Opera " at Circus in Stockholm. Besides acting and singing you can also hear her voice as “Belle” in the Swedish version of the new Disney classic “Beauty and The Beast” which came out in the spring of 2017. In the summer of 2017 she performed again as guest artist in the world's largest musical concert "I Love Musicals Allstars" on a sold out Ullevi Arena, together with artist such as Peter Jöback, Helen Sjöholm and Tommy Körberg. Emmi participated in “Melodifestivalen 2018”, Swedish semi-finals for the Eurovision, with the song "Icarus", which was specially written for her.