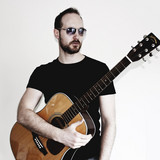 Marlon King is a singer-songwriter from Maidstone, south-east England. He holds a degree in music and was trained in classical guitar and piano from an early age. He started writing acoustic and indie style songs in his early teens, however, no songs were released at that point in time. After discovering flamenco and bossa-nova and performing local shows around southeast England, he started to incorporate these elements into his song writing. Outside of playing guitar, Marlon is a bit of a techy and enjoys getting involved in the music production side. Quite often recording and mixing a lot of the songs he writes. Marlon also plays electric guitar in bands Sons of Alpha Centauri and Yawning Sons.