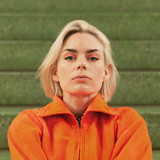 Originally from the Gothenburg, Sweden, Frida Sundemo released a handful of singles online that quickly garnered attention - like the sun-dappled “Indigo” and the airy, “Snow,” making her a favorite amongst tastemakers in the blogosphere. She arrived with her glittering debut EP, “Lit Up By Neon” in 2014 and her emphatic tracks found their way onto the soundtracks of US TV shows like Grey’s Anatomy, Teen Wolf and Scream Queens. Frida also made a cameo in the cult music biz film, Kill Your Friends - starring Nicholas Hoult and James Corden.