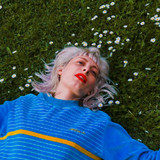 Having written and sung Steal and Midas from Maribou State’s debut album, as well as latest single Nervous Tics from their second LP Kingdoms In Colour, on which NME said she ‘shines’, Walker has been writing and touring live with the group for the last few years. Appearances with the band include Glastonbury, Secret Garden Party, US and European tours and a sold out Brixton Academy.   Meanwhile she has been quietly amassing solo material: a groove-led collection of songs detailing ‘casual romance for the bored and selfish’, ‘internet rage’, or ‘that wet-yourself sensation that time’s running out and you haven’t won the game yet’. With ‘wry, light-footed’ lyrics (The Times), ‘sultry and intoxicating’ vocals (The Guardian) and a background in classical piano; Walker found her angle when she introduced a live rhythm section to the electronic productions she’d been working on with collaborators including North Downs (Dama Dama) and Royce Wood Junior (37 Adventures). First cut drops Autumn 2018.