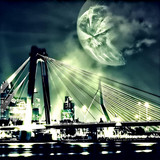 Founded in 1993 Rotterdam Terror Corps can be called one of the hardcore live act pioneers. DJ Distortion, the initiator of the infamous group conceived of a concept more dark and powerful than the prevailing Happy Hardcore sound. The act consisting of DJ Distortion, a MC and two fire breathing exotic dancers has been the standard in the European hardcore scene since 1993. With more than a 2000 live acts and 1000 DJ bookings in the last 25 years more than two million people worldwide have experienced the awesome power of RTC. RTC played all big Raves like: Tomorrowland, Thunderdome, Energy, Defqon, Q-base, Masters of Hardcore, Mysteryland, Hellraiser, Dominator, Ruhr In Love, Nature One, etc. Many people worldwide witnessed the power of the black flag and the white skull. In 2013 RTC celebrated their 20 years anniversary with 3 special parties and a new album called Respect The Core. In 2015 RTC was the hardest live act ever on Tomorrowland and Vice.com made a documentary about RTC . In 2016 RTC played at Qbase for the first time and a new album ‘Respect the Core was released in December 2017 during a special RTC party in Germany. This album also rocked the charts. In 2018 RTC celebrated the 25 year anniversary with a huge party at the Peppermill in Holland, where the band did one of their first parties almost 25 years ago. They dropped the album 'RTC is the legacy' as a surpise unannounced release. In 2020 RTC is working on new material for a december special album release.