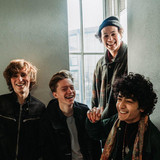 The guys from Forever Saturday are still youngsters with an average of a little more than 18 year old. The rockers have already won a handful of prices and have claimed the top spots at the UNICEF Talent Battle in 2013, the Kunstbende Zuid-Holland 2015 and Grote Prijs Schiedam in the same year.   Late 2011 guitar player Anthony (11) meets drummer Jens (10). Their mutual love for punk bands like Green Day and Blink-182 turn into weekly band practices at Jens’ attic. Kasper (Bass) and Dylan (vocals) join shortly afterwards, when Jens decides to leave the band he gets replaced by drummer Sekou.   In 2017 Forever Saturday hit the stage all over The Netherlands. The band support Marky Ramone, Green Lizard, Undeclinable in yet another sold out venue. They played Club 3voor12 The Hague and 14 shows during Popronde 2017. Music blog 3voor12 wrote a raving review on one of the Popronde shows, calling the band ‘the boys to watch out for!’ In 2017 Forever Saturday released their EP ‘We ain’t coming home tonight’. OOR magazine wrote: ‘Not as famous as Green Day or Blink-182 but almost as good on their debut EP which shines with enthusiasm and winning punk songs.’   In 2018 the band’s guitar and bass player were both focused on finishing high school and eventually they passed with flying colors which means 2019 is going to be the year of Forever Saturday. The boys are ready for it, what about you?