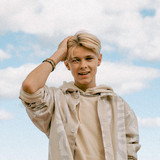 Theoz is the brilliant mind behind some of TikTok's most viewed videos. He’s been creating videos with other artist's music for several years now and he's been performing on stage with some of the biggest Swedish pop stars! At the age of 12 Theoz got a record deal with Warner Music. Theodor Haraldsson, better known as Theoz, is only 14 years old but already one of Sweden's biggest influencers. The rise to fame began when he started to dance in front of the camera a few years ago. But it wasn’t until the launch of the popular app TikTok that Theoz talent, dedication and creativity had a platform to really reach out to fans all over the world. Now he is pursuing his dream of becoming a pop-star and he couldn’t be off to a better start. In 2018 Theoz released his first single in Swedish, "Het". The track streamed millions of times on Spotify and was the most watched Swedish music video of 2018 on YouTube in Sweden. He followed up the big success with two singles specially dedicated to his fans in English in late 2018. In early 2019 Theoz started to work on new music and has recently released his new follow up single in Swedish. The new single "Theori" is written and produced by Anderz Wrethov (among others), the man behind many hits and pop stars in Sweden the past few years. Theoz is also on a Swedish tour during 2019 and is hoping to see you on the road!